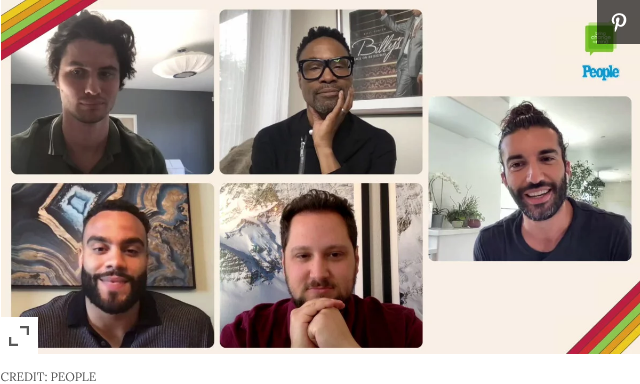 When it comes to talking about mental health, it can be difficult for men to feel like they can open up. That stigma is what Billy Porter, Justin Baldoni, Chase Stokes and more hope to change, and they’re working on that process in a frank conversation about their own mental health.

This week, PEOPLE and the non-profit organization Bring Change to Mind, which was started by actress Glenn Close, is hosting a four-part virtual panel series on mental health and young people, called Conversations with Bring Change to Mind in Partnership with PEOPLE.

On the panel, Stokes opened up about the ups and downs of the last two years.

“I feel like with every high I’ve hit [in his career], there’s been a major low,” he said, explaining that his beloved grandmother died right after he booked Outer Banks, his breakthrough role.

“It was this weird counter-experience, where I didn’t know how to process her death, nor did I have a space to process it due to a fear of failure with work,” he said.

Outer Banks premiered in April 2020, as most of the country was stuck at home, making it hard to celebrate the show. Then three days after its release Stokes’ cousin overdosed, and later last year after he moved to Los Angeles, he lost a close friend to cancer, and his uncle died.

“I have hit serious lows through this, and have had questions of my sanity, and been concerned with my stability. And I didn’t know how to ask for help, initially,” Stokes said. “I ended up going in for therapy and it was the best thing I could’ve done for myself. It’s an ongoing battle, which is the most important thing for me to remember.”

Thomas shared that he was nearly suicidal after being pushed to the limits of his mental health.

Thomas realized that he needed help, and he was only holding back from reaching out due to the stigma around men and mental health. “Once I finally got help it changed my life,” he said.

RELATED: Billy Porter Reveals He Was Diagnosed as HIV-Positive 14 Years Ago: ‘The Truth Is the Healing’

Porter said that the fact that he has been able to work on his mental health is a major change from earlier in his life. “We used to not be able to,” he said.

Stokes encouraged people to reach out for help, regardless of the stigma.

“Don’t be afraid to be vulnerable, because it’s okay not to be okay sometimes,” he said.

Sign up for our newsletter to stay in the loop.